A few weeks ago the Counter-Strike community’s eyes were on the Copenhagen Games. Not only were there some great CS1.6 and CSS tournaments, there was a new game on the pro scene – Counter-Strike: Global Offensive.

For CS1.6 fnatic won the tournament with their brand new lineup.

In CSS, mousesports pulled out a win in a tournament filled with great moments.

CS:GO’s final match was ESC vs SK Gaming with SK Gaming coming out on top.

It was great to see CS:GO played by some top CS players and to collect impressions from some legends such as HeatoN and GeT_RiGhT.

We also took this opportunity to analyze top players.

Thanks to the data we collect from CS:GO beta testers, we can compare gameplay data from the Copenhagen event to other players who were playing de_dust2 on the same day. Here’s a summary of the data:

It may seem surprising that tournament players had a slightly lower overall accuracy compared to players on public servers. But as we dig a little deeper, we see that the story is not so simple.

The Copenhagen players had a high headshot rate, and fired their bullets while standing much farther from their targets. So even though players in the tournament had similar accuracy to players in public servers, they were hitting smaller targets from a longer distance! They were also more efficient, gaining more kills per purchase from their weapons: 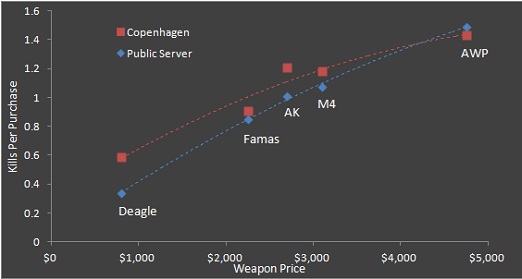 The CS:GO beta is driven by valuable feedback from many sources: forums, casual players, professionals, and the highly-skilled gameplay that we can observe in tournaments. Together, the community is helping make CS:GO great.