Thanks for your patience as we work toward our next big updates to the beta.  Based on your feedback, we’re making a ton of changes including a rewrite of sv_pure, a new system for adjusting audio spatialization, as well as additional work for character voices.  Stay tuned over the next few weeks for these updates.

Meanwhile, we’ve had a great opportunity to observe the wide range of skills on display among CS:GO beta testers.  Previously we looked at pro tournaments for examples of skilled play.  Now, as we continue to test our online matchmaking system, we can look at the rest of the beta population.  How do low, medium, and highly ranked players compare to each other?  As you’d expect, the higher a player’s ranking is, the more they start to look like a pro.

Some of the most obvious examples of skill show up when we look at weapons.

For example, when using the AK47 and the M4A4, we see that highly ranked players are able to maintain their accuracy from much further away. 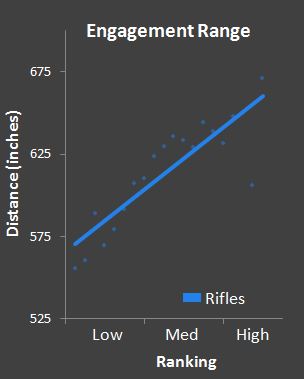 For pistols like the Desert Eagle, those players manage to get headshots far more often. 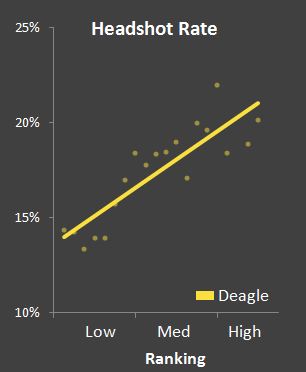 It’s exciting to see players translate their abilities to CS:GO.  As always, to help us out during development: load up the beta, group up with your friends, and go show off your skills!