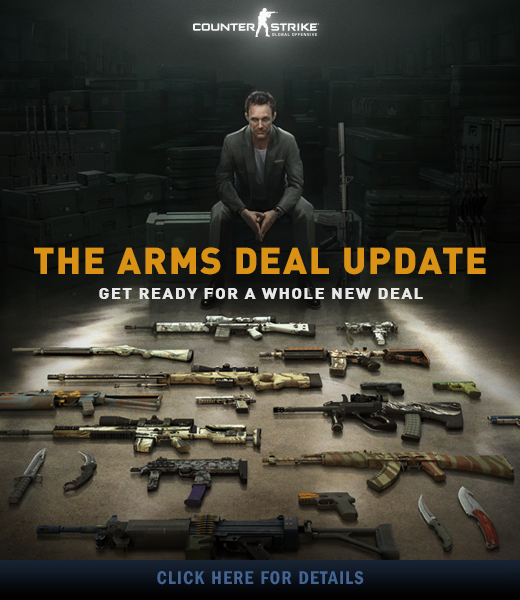 Introducing the Arms Deal Update, which lets you experience all the illicit thrills of black market weapons trafficking without any of the hanging around in darkened warehouses getting knifed to death. The Arms Deal Update lets you collect, buy, sell and trade over 100 all-new decorated weapons that you can equip in-game.

You can start collecting decorated weapons via timed weapon drops just by playing CS:GO on official and community servers. You can also get them by opening dropped weapon cases with the appropriate key, or by trading with other players through Steam’s Trading interface. Additionally, any decorated weapons you’ve found, bought or traded can be sold on the Steam Marketplace.

We also want The Arms Deal Update to give back to the community, which is why we’re happy to announce the eSports Weapon Case. A portion of the proceeds from sales of eSports Case Keys will go towards prize purses at CS:GO community competitive events.

Last but not least, as part of the Arms Deal Update, we’ve added two new stock weapons available to everyone, the M4A1-S and USP-S.

Find out more about the update here and through the Arms Deal FAQ, or simply hop into the game and check it out yourself. And as always, be sure to let us know what you think on the CS:GO forums, Reddit, and the Steam Community Discussions.