Today we’re shipping a change to the way accuracy is calculated while a player is in the air.

The goals of today’s changes are to increase the skill required to engage with opponents while jumping, and to remove some inconsistencies in the experience of shooting while mid-air.

Previously, when a player jumped the game applied a large ‘impulse’ to accuracy that would recover over time — the longer they remained in-air, the more their accuracy recovered. Because impulses to accuracy recover at the weapon’s recovery rate, it was not possible to independently tune the firing behavior of a weapon while standing vs. jumping. Additionally, there was no impulse at all if a player fell off a ledge (as opposed to jumping off of the same ledge).

Now, instead of recovering from an impulse over time, accuracy is tied to mid-air velocity. Just like moving on the ground, the faster you are moving up or down, the less accurate you will be. Each weapon has an independently defined accuracy at the apex of the jump.

Here is an example of how inaccuracy changes as a player jumps off of a ledge with an SSG08: 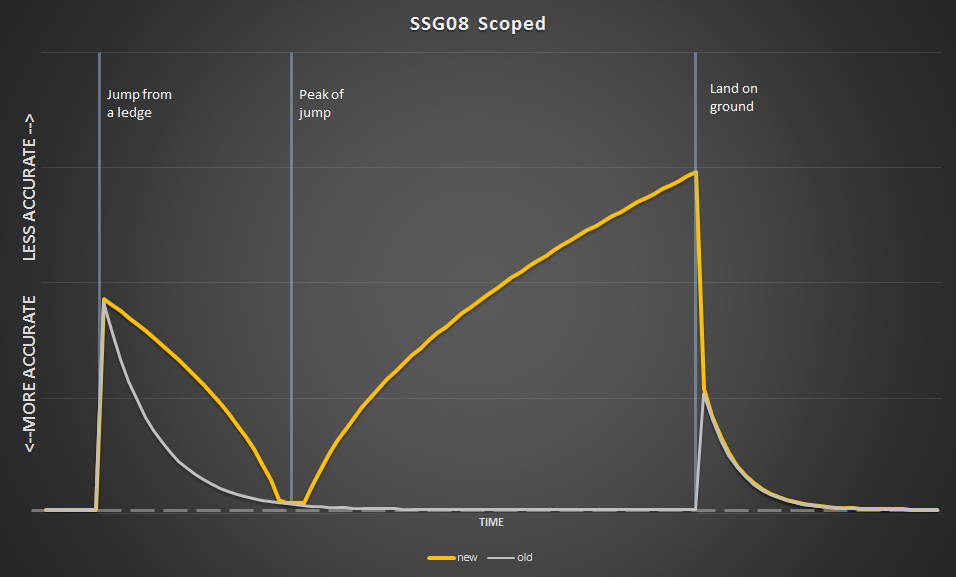 Now, in order to maximize accuracy while jumping, a shot will have to be fired at the highest point of the jump (when you are ‘stationary’ mid-air). Accuracy will suffer if a player fires too early or too late, and is always worse than when standing still on the ground.

For this update, we’re focused on changes to the system itself instead of tuning specific weapons. So while all weapons will require more precise timing while mid-air, their accuracy at the start and peak of a jump has not changed substantially.

As always, the best way to provide feedback is to play the game – jump into a match and give the new system a shot!