Since we launched Counter-Strike back in 2000, Mirage has remained one of the most popular competitive maps next to Dust2. In short, it’s a classic, and we’d be nuts to tinker with the core gameplay of something that already works so well.

However, let’s be honest: Visually, Mirage hasn’t aged as well as some of Counter-Strike’s other classic maps. Put simply, it could really use a new coat of paint. But it was important to us not to fix anything that wasn’t broken. Over the course of Mirage’s update, when we weren’t playtesting the old map, the CS:GO team was immersing itself in demos, movies, and streams about it. We wanted to have a detailed and comprehensive understanding of how the map was played on a competitive level, so that we could achieve a specific goal: to improve the readability and graphics of Mirage without losing any of the gameplay, jumps, corners, timings and balance that has made it so incredibly playable for three generations of Counter-Strike players.

Below, we’ve chosen a few examples that highlight some of the updates we made to Mirage, and our thought process behind them. 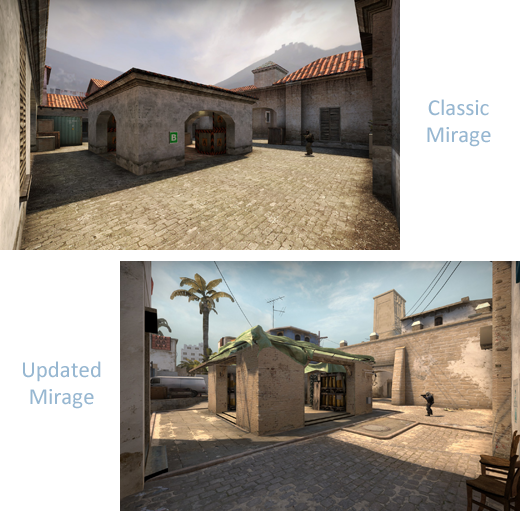 Above is a good example of our attempt to improve the map’s overall readability. You’ll notice in the classic Mirage map, most of the wall textures had a dark and noisy bottom half – right at player height. In most lighting conditions, this had the potential to reduce enemy readability. For the updated Mirage, we went with lower contrast, less noise and a brighter palette to make player silhouettes easier to identify against the background.

You’ll also notice that in the image above, the boxes on the left that lead to balcony have been changed to better match the theme of the map. However, the changes are purely cosmetic: the dimensions are the same and the gameplay hasn’t changed. 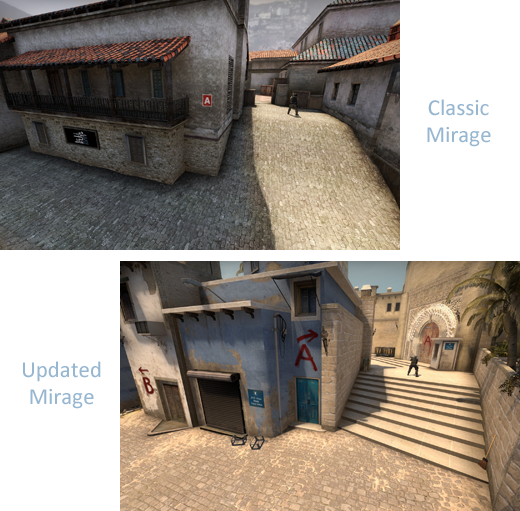 A common complaint we receive from players is that there are a lot of spaces in classic maps that just feel too tight. In Mirage, this was particularly pronounced at the entrance to A from CT spawn. So we widened that entrance to improve the flow of the game while making the space more interesting to move through. 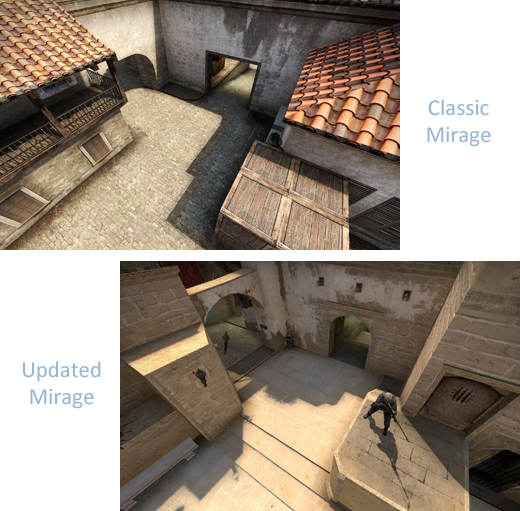 Here, after noticing time and time again that CTs could cover the terrorist apartment balcony from behind the box with very little risk to themselves, we made CTs a bit more exposed while also making the area more accessible. Previously, this was a crouch-jump hop onto the boxes to cover bombsite A. The stairs behind the platform were added to make the area a more viable option for taking/retaking the site, while also making it a slightly more dangerous place to be. 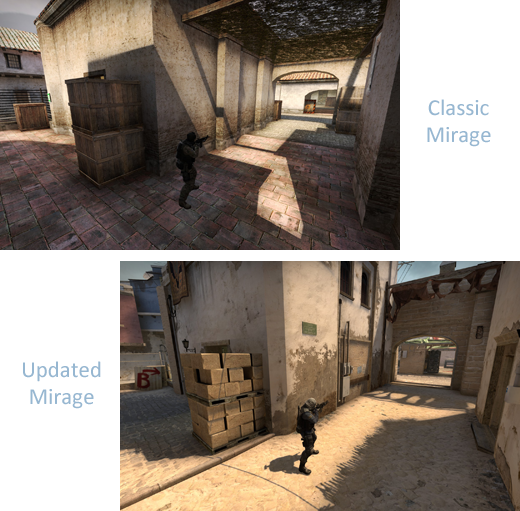 Above is an example where the original geometry of the classic map has been retained in order to maintain the same peeking angles. 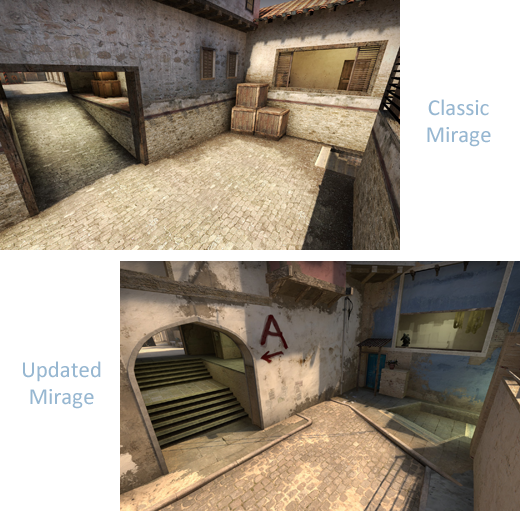 In middle, it was very important that the boxes players use to boost into the sniper’s nest stayed the way they were. We updated the art to be more in-line with the theme of the map, but as with the boxes at Bombsite B, the gameplay remains the same.

In the classic version of Mirage, CT snipers had an easier time of staying concealed in the sniper’s nest spot. In the updated version, snipers now silhouette better against the back wall.

Lastly, we also noticed that the underpass tunnel above right was largely neglected by some players, due to it being too concealed. We brightened up the entrance and wrapped the stairs around the corner. As a result, it now gets a lot more attention. 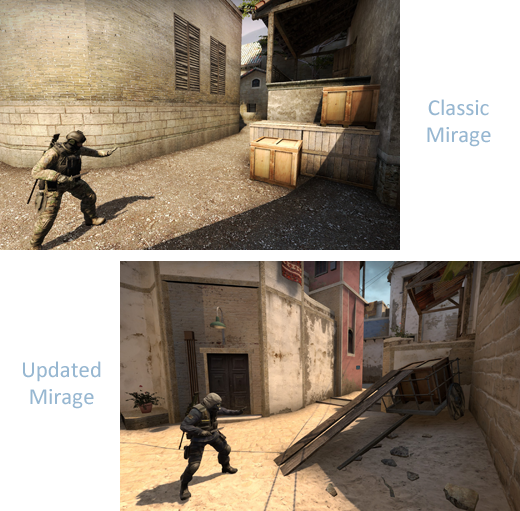 Previously, Ts needed to do two box jumps to enter the main route to B from T spawn. These boxes made the path to B via the apartments less accessible and kept this route from reading like the main route that it is. Preserving the time it takes the Ts to reach B via apartments, we made the entrance easier to navigate and more obvious to use, while not disturbing the established balance. 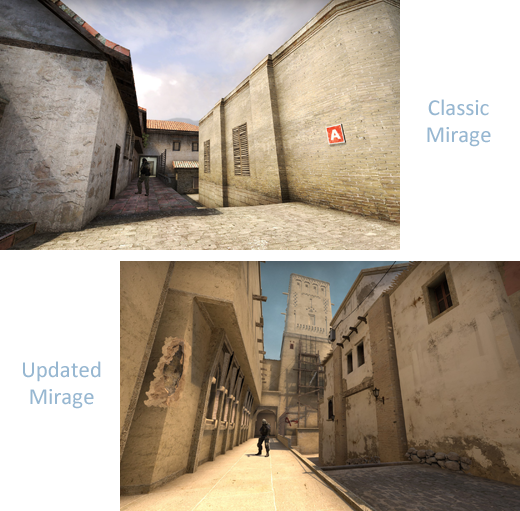 Coming back to the previous point about space, above is another example of where we took the opportunity to give players a bit more room to navigate in a way that did not affect gameplay in any significant way.

As you might expect, we’ve been collecting data throughout the development process to measure how players approach the original de_mirage (for example, see the heatmap below). Looking forward, we’ll be carefully monitoring these statistics to ensure that the same classic gameplay has been retained in the updated version. 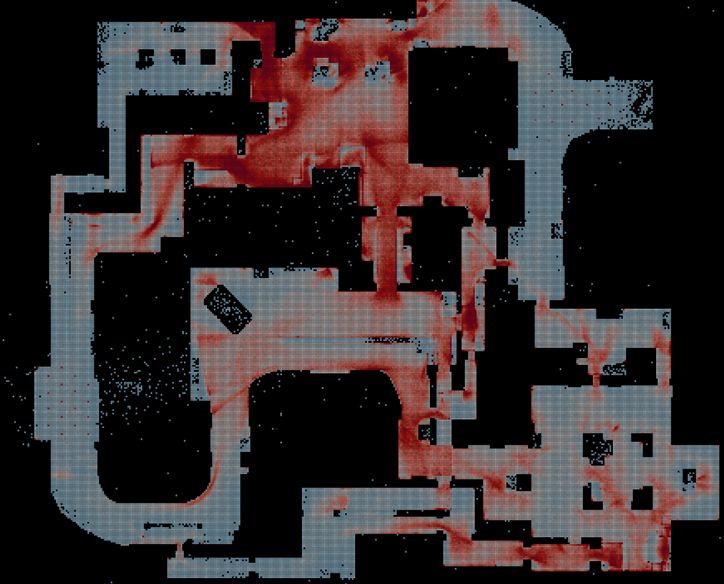 We hope you enjoyed this glimpse into our process. We’ll be releasing the map next week, so be sure to keep an eye out for it. As always, we look forward to the feedback we get from a wider audience when we do.